Values Coaching : How do you know what your values are?

‘How do I know what my values are?’ As my client asked this question there was a note of desperation in his voice. ‘I mean I used to think that passion was one of my values but is it really? Do values change over time? What happens if my values conflict with each other?’ he continued. These were questions I had not heard in my coaching for some time and I was thrown back to a valuable exercise I had learnt in the early days of my coach training thirteen years ago.

‘We can try a simple exercise to answer those questions’ I replied, recalling the values elicitation exercise I had used back then to clarify and prioritise my own values. Over the next hour I coached my client through this simple and powerful exercise which asks the client to think of three peak moments in their lives when they felt their values were being fulfilled and three crisis moments when their values were being trampled upon. We distilled from these moments the client’s core values. At one point, my client claimed he had a value of ‘people’ and I challenged this saying ‘People is not a value, what is the value behind that word?’ ‘Loyalty’ he replied. ‘Yes, that is a value and what is the value behind that?’ I continued to push. ‘HONOUR!’ he exclaimed and, at that point, I had shivers running up and down my spine for I knew he had spoken his truth. In this way, his values tumbled out one by one and he had soon written down a list of eight core values on his iPad.

‘So imagine these eight values are in your house and the house is burning down’ I continued ‘You can only rescue one value at a time. Which one would you rescue first?’.’Growth’ he replied. ‘And which one next?’. ‘Security’….and so on and so forth. We proceeded until all eight values were sorted in order of priority. ‘Hang on’ interrupted my client ‘I’m not sure whether growth and security are in the right order. These values oppose each other and seem to fight for dominance in my mind’. ‘That’s ok’ I replied ‘Values can oppose each other and jostle for position and, understandably, this creates a tension inside us but that tension can be creative as well as problematic’. At this point I recalled the Yerkes-Dodson curve that Ian and I speak about in the tension ‘T’ component of our FACTS coaching model. 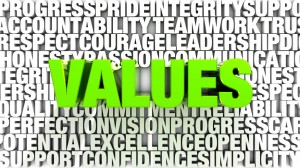 Think of your values as like your children. They are all unique, different and important to you. Like children they all want to be the centre of your attention and they all need to be honoured at different times and in different ways. Sometimes children squabble and fight with each other and then you have to step in to make the peace. Sometimes they go and hide in their bedrooms sulking and wait for you to come and put an arm around them. Sometimes they jump up and down in front of you excited and full of joy. Over time they change and you start to see them in different ways but they are still your special children. I suppose if we were being good parents to our values we would make sure we did not abandon any of them, that we recognised their unique qualities, and that we managed any sibling rivalry in a way that maximised the well being and harmony of the family as a whole’.

When I had finished this spontaneous analogy, I looked up at my client and saw that his face had flushed with emotion. ‘I’ve never looked at it that way before’ he said. After a long pause, in which I could see that several pennies were dropping in his mind, he said ‘How come I couldn’t do this work on my own? Why do I need coaching in order to work these things out?’ I wasn’t sure how to respond to these further questions but, in the end, I said ‘Well, we’re human beings. We’re hard-wired to connect. We do our best work when we are in the presence of those who do not judge us, who listen to us and who believe in our highest potential. That’s what coaching is I suppose.’ With that we brought the coaching session to a close and I drove back home amazed that after thirteen years coaching can still disarm, surprise and uplift me with its magical and unexpected twists and turns.

Post your thoughts on the Challenging Coaching LinkedIn Group.

As we have over 60 blogs on the site we now have a blog index that we hope you will find useful.

Get feedback from your coachees on your challenging coaching skills with the on-line 360 feedback tool.

John Posted in News and Muse